Paul Marteau (1885–1966), heir and director of the Grimaud card manufacturing company, is best known for the deck of Tarot cards he produced in 1930, and the accompanying book he published in 1949. This deck, still in production, is the most widespread and best-known of the Tarot de Marseille type decks. Leaving aside the purely commercial aspect, the extent of his influence on the world of Tarot is as yet still little understood, through lack of research; if not badly understood or even misrepresented at times.

In an attempt to correct the record, and provide further indications in English, we have published a number of reviews of his work, and the perceptive reader will have noted the variety of horizons from which the reviewers hail; occultists, card historians, art critics, writers, poets; the influence of his work extended far beyond the confines of the insular worlds of cartomancy or card specialists, but instead brought the Tarot out into the open, as a cultural object in its own right.

Continuing in the series of book reviews, we present this piece by the noted art critic Charles Estienne (1908-1966). An important and influential critic and writer, Estienne was one of the main promoters of abstract and figurative art in the post-war period, and the author of numerous books on the subject. Close to André Breton for a time, it is therefore no surprise that he turned his attention to the Tarot, and especially, to the novel idea expressed by both Paul Marteau and Jean Paulhan, namely, that the Tarot be approached as an optical language in its own right, and conversely, applying the tarological exegesis to figurative art.

On that subject, it is not uninteresting to note the illustration by the artist Auguste Herbin which accompanied Estienne’s piece, which we have been unable to find, but which we have exchanged for a suitable replacement. The sculptor Jacques Villeglé later remarked that: “Charles Estienne had judiciously illustrated his article on the release of another book, this time dedicated to the Tarot of Marseilles and prefaced by Paulhan, by an Herbin, which, just like an arcana, was composed of simple forms with flat tones, o how resplendent!” (Jacques Villeglé, Cheminements, 1943-1959, 1999, p. 35.)

The following piece was originally published as “L’Art n’est-il qu’un jeu ? Bilan d’une année de peinture (1)” in the journal Combat, 14 September, 1949. It was followed by a second piece on recent exhibitions a week later, further expanding on the author’s views of expressionism and realism in art, but without reference to either the Tarot or to Marteau’s book. The original may be read on the French news archive here.

Assessment of a Year of Painting 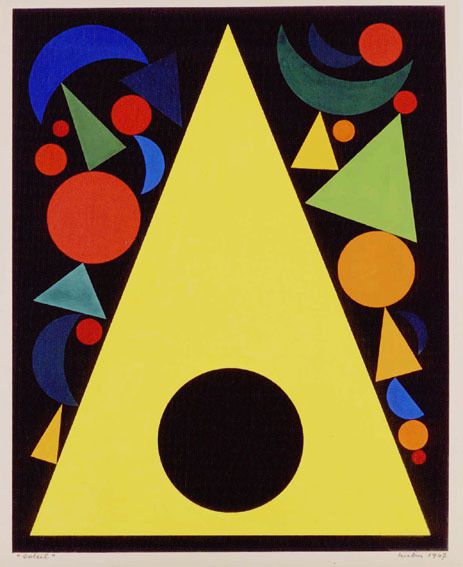 A curious painting by Herbin. (This is not the exact artwork as reproduced in the original article, which we have been unable to find. – Trans.)

Is Art But A Game? – An Assessment of One Year of Painting (1)

Before submitting “my” list of the chief exhibitions of the last season to my readers, I would like to tell a little story that may somehow contribute to articulate its meaning.

Over the course of a conversation on abstract art with the “figurative” artist [Maurice] Bianchon and his wife Marguerite Louppe, also an artist, Léon Degand recalled his reply to [Léon] Gischia during a similar discussion:

“No one, said Gischia, would have had the idea of changing the rules of the game of whist. The same goes for painting…”

— “Well, replied Degand, but what if I wish to play bridge?”

On the moment, Marguerite Louppe could only declare herself in favour of the artist’s “freedom of the game”. But the next day, she declared: “I was thinking that we were not talking about the same thing: because you are no longer playing cards, you are reading them, you abstract types…”

The “Tarot of Marseille”

That this little anecdote might go much further then its superficial sense was confirmed to me recently as I leafed through the very curious work dedicated to the Tarot of Marseille published by Arts et Métiers Graphiques, and enriched, as they used to say, with a malicious and profound preface by Jean Paulhan, an exposé by Eugène Caslant (of the École Polytéchnique, as the publisher notes), and finally with the 78 cards of the Tarot pack, reproduced in colour, the main text being by Paul Marteau, director of the Grimaud firm, specialised, as we know, in the manufacture of playing cards.

Now the “Tarot” is also a pack of cards, but of a particular type, since the figures and the suits which it consists of have a precise symbolic significance, and that the “combinations” which its cards may give rise to are supposed to “express the flowing and varying play of the universal forces.” This is why, continues Eugène Caslant, the one who handled these cards considered that their shuffling, if it were done in affinity with the mental and passional prospection of the querent, could discern the cosmic law at work, and reveal, to a certain extent, fate.

Of course, I am not ignoring the fact that broaching the grave and hackneyed subject of the “fate of art” will have me labelled an obscurantist. And yet, close to a very ancient popular practice, the Tarot, of which our current decks of cards are but the degenerate descendants — and without danger, since we no longer play at “fate” — it has been difficult not to make some very simple observations by way of hypotheses or indications…

1. That abstract art presently finds itself reproached for being flat, technically speaking, as playing cards were. The reproach was already classic, in their day, with respect to Manet, Gauguin, those ancestors of abstraction. But an Herbin today, the flat forms and shades he employs, do they not correspond, to his mind, to an alphabet, that is, to a precise symbolism? And is this symbolism not fairly close, in the end, to that of the Tarot, and which gives that strangeness and mystery to some Herbin pieces, for example, the one exhibited recently at the [Salon des] Réalités Nouvelles?

Second observation: Does current figurative art not increasingly appear to you as a “game without danger”, where the rule is to stop at the appearances of the world to avoid burning oneself by seeking what is behind it?

The Secret of the World

It is therefore not absolutely absurd to reproach the so-called abstract painters of violating, to a certain degree, the “rule” of a certain pictorial tradition, for in fact, they are no longer playing at only reproducing appearances; and this in order to “participate in the secrets of the world, — short of understanding them,” as Paulhan remarks. They do not reason by identities, but proceed by analogies: which is the very principle of the Tarot (and of poetry…).

And, still following the same comparison, a non-figurative composition of forms and of colours, if painted by an authentic artist, one in deep “affinity” with his “mental and passional projection,” this “combination” is in greater accord with the “cosmic laws”, and reveals more of the presence of Nature than the repetition or the imitation of forms outside it. In this way, new art, probably unwittingly, reconnects with an even more ancient tradition than that of the Renaissance, and in its own way, it no longer plays cards, it reads them… or it plays something else, that is truly its fate, fused with that of the artist-man.

One will note, I hope, that such principles demand just as much, if not more, from so-called abstract art than from its contrary…

Tarot Blogs in Other Languages