Paul Arnold (1909-1992), writer, traveller, founder of the European Buddhist Union, and Supreme Court judge, played a role somewhat analogous to that of Christmas Humphreys where Buddhism was concerned in France. As a writer, he was a specialist on the history of theatre, and penned a number of serious books treating of the esoteric aspect of the works of Shakespeare and Baudelaire, as well as two scholarly works on Rosicrucianism and the origins of Freemasonry. As a native of Alsace, Arnold spoke German perfectly, and produced translations of the poetical works of Nietzsche as well as Goethe’s Faust. He also wrote a number of novels and translated the entire body of Shakespeare’s works in 20 volumes, confirming his status as accomplished man of letters.

Later in life, Arnold devoted himself to the study of Buddhism, travelling extensively in Asia, especially Japan, producing a number of influential works on Buddhism in the process, both on Japanese Zen and Tibetan Tantra. Further biographical details may be found here (in English) and here (in French). As far as the Tarot is concerned, Arnold provided Jean-Marie Lhôte with insights into the esotericism of Shakespeare for his catalogue-monograph Shakespeare Dans Les Tarots, (Bizarre, issues 43-44, J.-J. Pauvert, 1967) and was thus well-qualified to review Paul Marteau’s book. One will note the transparent references to the Tarot-inspired works of André Breton and Gérard de Nerval. This review appeared in the Cahiers du Sud, 1 July 1949. The original may be read on the French news archive here. 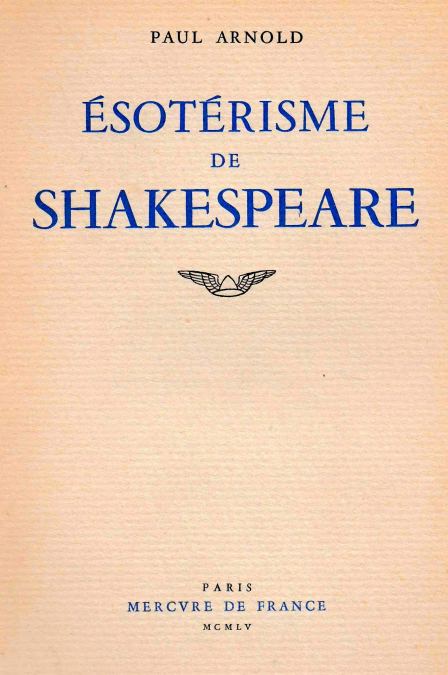 One of the great cardmakers of France, Mr Paul Marteau has given us a rational key to one of the oldest and most powerful instruments of the occult sciences, the game of Tarot – particularly the Tarot of Marseille whose 1761 edition, no doubt reproducing traditional figures, serves as the basis for the present study – is not a game of chance, but a form of knowledge of the particular destiny of man in the cosmos. Some of its arcana are famous. Who has not heard tell of Arcanum 17, “the Star” of the Spirit? Who does not know that Nerval was in conjunction with Arcanum 13, “Death,” – resurrection?

Each of the 78 cards which make up the Tarot of Marseille is here described in minute detail; each of its elements (line, figure, objects, colours, orientations) is explained according to the traditional interpretations. And we are indebted to Mr Marteau for having completed this tradition, often incomplete or obscure, with a lot of prudence. Enlivened by the colour reproductions of the cards under consideration, these examinations explain in succession the symbolism of the number inscribed according to the esoteric tradition, the general significance, the analogical particularities, the concrete significance in the three planes: mental, animic [psychic], and physical. A summary of the principles of reading the cards completes the study. A more complete or clearer user’s manual could not be wished for.

We are now suddenly headlong in a dangerous, enchanting world which, according to a solid tradition, allows one to cruelly reveal the consultant’s destiny, less on the plane of his immediate concerns, which are nonetheless not neglected, rather, on the plane of the evolution of the soul in the cosmos, the result of Wrestling with the Angel which we are perhaps unwittingly engaging in. Whatever the objections that the recourse to this ancient method of introspection and divination may raise for our positive minds, Jean Paulhan, who introduces the volume, is right to recall that “there exist occult facts. And the least that can be said is that these facts do not allow themselves to be dominated, nor allow themselves to be wholly known.”

Tarot Blogs in Other Languages